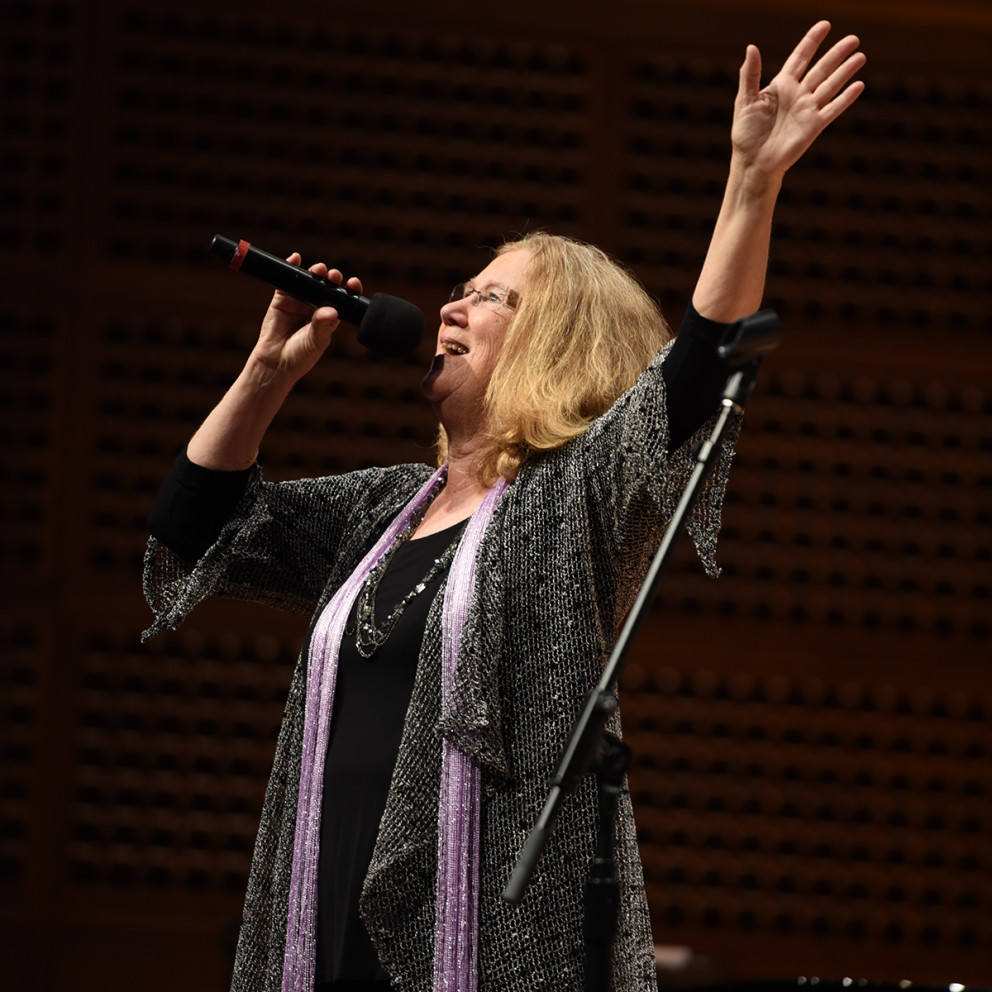 Holly Near has been singing for a more equitable world for well over 50 creative years. She is an insightful storyteller through her music, committed to keeping the work rooted in contemporary activism.

Respected around the world for her music and activism, Holly released her 31st album in 2018.

One of the most powerful, consistent, and outspoken singers of our time, her concerts elevate spirits and inspire activism. A skilled performer, Holly is an outspoken ambassador for peace who brings to the stage a unique integration of world consciousness, spiritual discovery, and theatricality.

Holly’s joy and passion continue to inspire people to join in her celebration of the human spirit. Equally compelling at her shows and through recordings, Holly’s music fully engages listeners in the world around them—speaking to anyone who believes in peace, justice, and feminism; a wonderful spectrum of humanity.

In 1972, Holly was one of the first women to create an independent record company, paving the way for women like Ani DiFranco and others. Her goal was to promote and produce music by politically conscious artists from around the world, a mission that Redwood Records fulfilled for nearly 20 years. Often cited as one of the founders of the Women’s Music movement, Holly not only led the way for outspoken women in the music world, but also worked for peace and multicultural consciousness. Throughout her long career Holly has worked with a wide array of musicians including Pete Seeger, Ronnie Gilbert, Arlo Guthrie, Mercedes Sosa, Bernice Johnson Reason, Bonnie Raitt, Jackson Browne, Joan Baez, Phil Ochs, Harry Belafonte, and many others.

Holly Near has been recognized many times for her work for social change, including honors from the ACLU, the National Lawyers Guild, the National Organization for Women, and the National Academy of Recording arts and Sciences.

Another significant arena of Holly’s activism is the LGBTQ community. Her interest was both personal and political. She was one of the first celebrities to discuss her sexual orientation during a pioneering 1976 interview with People magazine. A staunch advocate for LGBTQ rights, Holly is comfortable with her own sexuality and has a clear understanding of the fluidity of sexual orientation.

Holly is also a teacher, presenting master classes in performance craft and songwriting to diverse audiences. Building on this role, her historic papers are housed at Radcliffe’s Schlesinger Library and are regarded as an informed look at the last 50 years of social change movements.