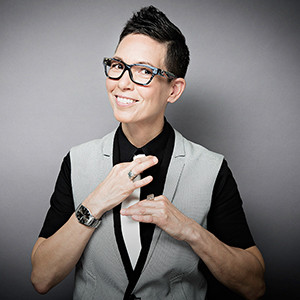 When Elvira Kurt is not writing about herself in the third person, she’s a Canadian Comedy Award–winning, three-time Gemini Award–nominated stand-up comic and Second City veteran, who has starred, hosted, or appeared in too many TV shows and comedy specials to mention. Except for these: Popcultured with Elvira Kurt on The Comedy Network, the first late night talk show hosted by a woman, which she also created and produced; The Gayest Show Ever, co-created, co-produced, and hosted by Elvira and winner of Best Pilot at the Banff World Television Festival; Queer as Jokes, with Elvira as host and headliner of CBC’s first ever all-gay comedy special; and Big Girl Now!, Elvira’s award-winning one-hour CTV comedy special.

With appearances on everything from The Tonight Show with Jay Leno, CBC’s The Debaters, CBC comedy specials from Just For Laughs in Montreal, and the Halifax and Winnipeg comedy festivals to her own comedy specials airing on Comedy Central, HBO, Showtime, E!, and Bravo, there’s definitely something for everyone. Elvira headlined LOGO’s One Night Stand Up from Washington DC and hosted the network’s First Comes Love and Cruising the Caribbean with Olivia. On CBC’s The Second City’s Next Comedy Legend, Elvira was a judge along with Joe Flaherty and Dave Thomas; she’s guest starred on Degrassi: The Next Generation, hit the stage in the Vagina Monologues, and been featured in several comedy films, including the multiple award-winning Laughing Matters…More!

In her spare time, ha, Elvira writes comedy for TV, from series like This Hour Has 22 Minutes and Little Mosque on the Prairie to specials, most notably for Ellen DeGeneres on HBO. But that’s not all! Elvira’s toured North America as one of the hottest college acts around, nominated as both US College Comedian and Entertainer of the Year.